Bobby McFerrin was onto something when he titled his second album The Voice. At the time, in the mid-1980s, it was a sobriquet more readily associated with Frank Sinatra — but in its definitive clarity, loaded with implications, no term could have been better suited to his art. McFerrin made history with that release, a solo-vox tour de force, and later eclipsed his own feat with Simple Pleasures, which yielded a No. 1 single and three Grammy awards.

Needless to say, McFerrin has always contained a universe of sound beyond that historical smash hit, "Don't Worry, Be Happy." He's an NEA Jazz Master, a generous collaborator, an endlessly inventive vocal talent, an orchestral conductor. And, as we're reminded in this episode of Jazz Night in America, he's also a great storyteller and an incisive assessor of his own artistic motivations.

Speaking with our host, Christian McBride, McFerrin recalls the precise moment he realized he was a singer; remembers a formative encounter with the Miles Davis band and reflects on his inspiring musical relationships with cellist Yo-Yo Ma and the late pianist Chick Corea. We'll hear music from across his chameleonic career, ranging from Mozart to Cream. And we'll consider some of the advice he lives by: that "the stage is a platform for adventure."

Special thanks to Linda Goldstein and Different Fur Studios 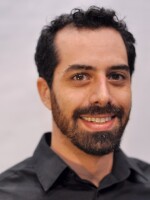 Alex Ariff
Alex Ariff has big ears. A musician first, he straddles the worlds between performance/songwriting, media production and storytelling. Alex earned his B.A in Music from Florida State University where he fell for all facets of jazz music, history, and culture. He went onto earn his M.A. in Jazz History and Research from Rutgers University-Newark. It was during this time that Alex began working at WBGO 88.FM, where he currently works as a producer on Jazz Night in America. Outside of WBGO, Alex enjoys lapsang souchong, bike rides, and playing with his band The Wali Sanga.
Trevor Smith
Trevor joined the WBGO Development Department in April of 2017 and currently handles grant writing and institutional giving initiatives as the Coordinator of Corporate and Foundation Relations.
See stories by Trevor Smith

Nate Chinen
Nate Chinen joined WBGO as the Director of Editorial Content at the start of 2017. In addition to overseeing a range of coverage at WBGO.org, he works closely with programs including Jazz Night in America and The Checkout, and contributes to a range of jazz programming on NPR.