Deepa comes from NBC News. During the campaign, she was on the road covering then-senator Kamala Harris' and Elizabeth Warren's campaigns, and then continued following Harris' travels as Joe Biden's running mate and Vice President.

In addition to her extensive campaign experience, she has covered issues from rural health care access to the country's aging water infrastructure system, across platforms — broadcast, the web and native to social.

A particular focus of her work is reporting at the intersection of race, identity and politics. Some standout pieces from the 2020 election cycle include a look at younger Asian-Americans conducting voter outreach and sharing tips on TikTok and an examination of the political calculus for candidates confronting and, often, correcting mispronunciations of their names.

We're excited to turn this story radar loose for our network. Deepa will be rotating in among the growing digital reporting team on the News Hub with Saeed Ahmed and Catherine Laidlaw.

Deepa started her career as a freelance producer for the BBC's Washington Bureau and then freelanced for NBC before joining Meet the Press as an associate producer.

She's a proud member of the Asian American Journalism Association and an alum of the Gwen Ifill Fellowship from the International Women's Media Foundation.

A self-professed hopeless chef but avid foodie, she remains committed to finding the best #tacosonthetrail — as the hashtag goes. You can find her taco (and news) content on twitter and insta at @deepa_shivaram. 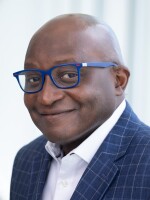 Terence Samuel
Terry Samuel is acting VP and Executive Editor at NPR. In 2017 Samuel joined NPR as a deputy managing editor; he was promoted in 2019 to the Managing Editor for News. In that role, he has been involved in every aspect of the daily work across all newsroom teams and has had a hand in guiding the coverage of the biggest stories of the last few years. He also spent time as the interim Executive Producer of Morning Edition during 2021.
Justin Bank
Justin Bank is an editor in the NPR newsroom and also serves as Senior Director of Digital Strategy and Head of Digital News.