The expansive sandy beaches in Fort Myers for years have attracted people from colder states, like Beth and Ralph Sampson. They call Michigan home, but spend much of the year in Florida.

"It's just charming here," Beth Sampson said. "It's not like, oh, the nightlife. I think the carpet gets rolled up here at 9 o'clock at night."

Lee County isn't as upscale as many of Florida's coastal areas. It's a county in which 28% of renters are low-income or paying at least 40% of their income to rent, according to a 2022 report from the Shimberg Center for Housing Studies.

The Sampsons own a home in Fort Myers Beach – it's still standing. But in October, one month after Ian hit, their neighborhood was a mess, with hollowed-out remnants of homes up and down their block.

Beth Sampson said many of her neighbors don't have the means to rebuild.

"One double lot has already sold – and we don't know to who, or for how much – on the street behind us. It's like, oh boy, that's fast," Sampson said. "I'm afraid ... we're going to lose all that beauty that we all shared."

In 2021, Florida's real estate industry accounted for $294 billion, or 24% of the gross state product, according to a report from the National Association of Realtors. More than 300,000 people move to the Sunshine State each year.

Two affordability concerns are emerging among residents as developers turn to Southwest Florida: flipping damaged single-family homes, rendering them unaffordable for long-term residents, and the construction of larger luxury complexes.

Cozza said that, since the hurricane, developers have discovered a "completely blank canvas" in hard-hit coastal areas.

Cozza added that his firm has already been involved in acquiring 39 properties since Hurricane Ian. One of his clients bought a damaged waterfront home in Cape Coral, across the bridge from Fort Myers, for $670,000. After renovations, Cozza expects it to sell for almost $1 million.

"You're going to see values jump, and you're seeing a lot of new players that are now in the area that would not have been in this area pre-storm," Cozza said.

This, Cozza said, is just plain market dynamics. Many homeowners did not have flood insurance, so they can't afford to rebuild – and that's an opportunity investors are seizing.

Michelle Meyer, director of the Hazard Reduction and Recovery Center at Texas A&M University, said it's expensive to build new structures up to code – most of which has been rewritten to make houses better able to withstand disasters.

"Older houses, in general, are more affordable," Meyer said. "And so when you wipe out an older housing stock, even just building new, period, is going to be more expensive."

Federal disaster recovery money to help homeowners rebuild does exist. In the wake of previous hurricanes, states have received hundreds of millions of dollars from the Department of Housing and Urban Development, or HUD, to provide loans to lower-income homeowners for reconstruction and repair costs.

But Meyer expects it will take one or two years before that money is available in Florida, since the state first needs to submit a funding plan to HUD for approval. Until then, she said, local officials can encourage homeowners not to sell out of desperation, and instead, "find a way to have them hold onto their property and rebuild their property and remain in the home."

Jason Green, an independent zoning consultant for the town of Fort Myers Beach, spoke at the Local Planning Agency's meeting on Dec. 6. He said he doesn't expect local zoning regulations in the town to change significantly in the coming months.

"There are some duplexes, there's a few triplexes and quads worked in there over the years," Green said in reference to zoning in Fort Myers Beach. "But for the most part, you'll see that there are single-family homes."

But as developers buy and renovate single family homes, they, too, are becoming less affordable.

Some investors will push for bigger developments. They were doing so even before Hurricane Ian hit.

Joanne Semmer, who has lived near Fort Myers Beach for more than 50 years, has been trying to stop one such project. She lives steps away from the town's commercial fishing docks and working waterfront, and she's the president of the Ostego Bay Marine Science Center, a local environmental nonprofit organization.

In 2020, Semmer and her brother sued Lee County after the county rezoned to allow a high-rise apartment complex across the street from her home. An administrative judge ruled in Semmer's favor, on the grounds that the development would increase hurricane evacuation times.

But one month before Hurricane Ian, Florida Gov. Ron DeSantis and his Cabinet overturned that decision, green-lighting the project and paving the way for more density across Lee County's hurricane-prone areas. When an administrative judge in Florida strikes down a change to the state's Comprehensive Plan, the governor and Cabinet vote on whether to approve that decision, said attorney Ralf Brookes, who represents Semmer.

"Southwest Florida has a different flavor," Semmer said. "We really don't want to become another Miami. But money talks."

And now, in the aftermath of Hurricane Ian, those concerns are only mounting.

Semmer said she's frustrated by efforts to develop the waterfront, but she'll keep fighting to preserve the character of the town.

"The developers want to come in and take over our working waterfront and build condominiums," Semmer said. "So many of our areas are being sold out." 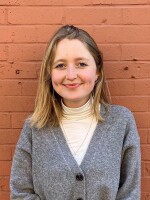 Danielle Kaye
Danielle Kaye (she/her) is a 2022-2023 Kroc Fellow. Before joining NPR, Kaye worked as a business reporter at Reuters, where she covered compensation policies and union organizing at technology and retail companies. She graduated from UC Berkeley in 2021 with degrees in Global Studies and French. While studying in Berkeley, Kaye reported and produced for listener-funded radio station KPFA, covering protests and housing issues in California for KPFA's morning public affairs show. She was also a researcher at UC Berkeley's Human Rights Investigations Lab and a news reporter and editor at the student-run newspaper The Daily Californian. Kaye lived with a host family in Dakar, Senegal, in 2019, which inspired her to write her senior thesis about threats to Senegal's artisanal fishing communities.